Blog Share!
The beautiful Amanda of retro blog Welcome to Flipsville reviews the Caroline Dress in 'Mod Bloom Blue'
Here's what she had to say about it:
"A few weeks ago, the lovely Heart of Haute team approached me to use a photo from my Instagram on their beautiful Website as well as send me a few garments to review here on my blog - I was over the moon! The parcel quickly arrived and there were 2 beautiful dresses and a cardigan. I've divided up my review posts, and this is the first of the Mod Caroline Dress in Mod Bloom Blue.
I absolutely love Heart of Haute's garments. Their prints and styles are always sublime, and as a seamstress I can vouch for the quality, it is by far one of the best I have come across in ages. Heart of Haute garments are also designed and made in the USA! It's always important to me to support ethical companies. 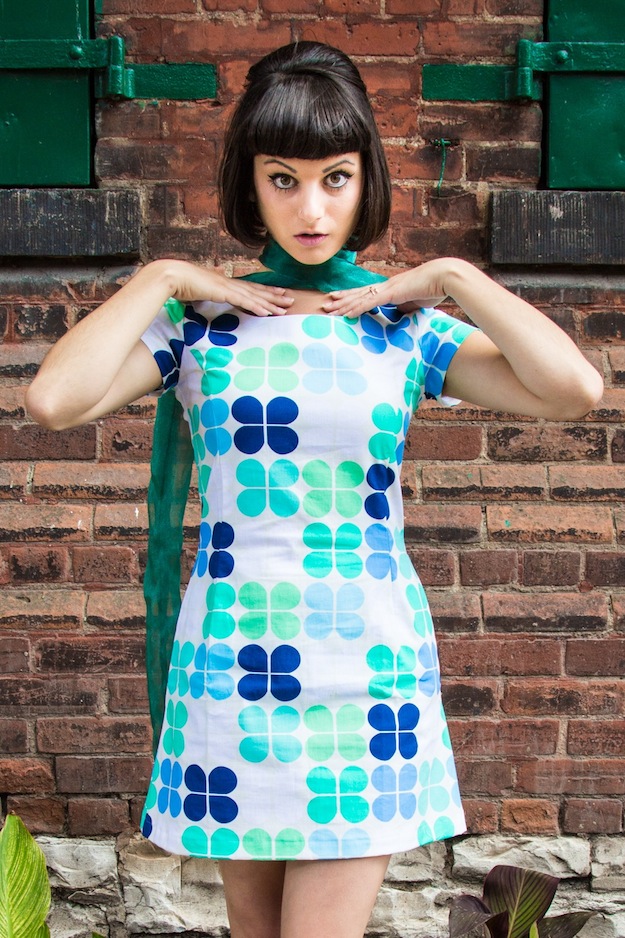 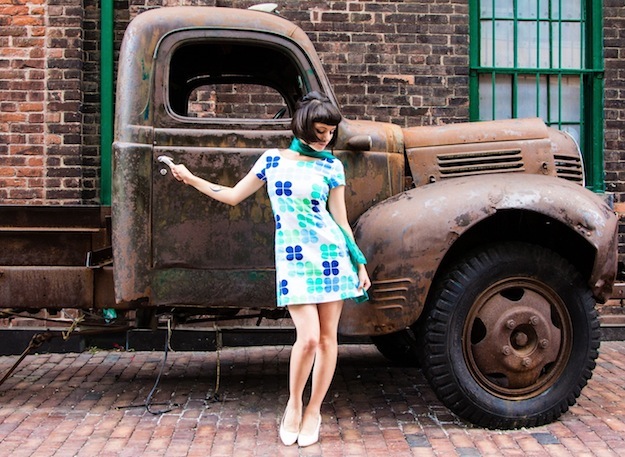 As a petite and short woman, I have always found it a constant struggle to find a mod A-line dress that fits me. Before I tried this dress on I was worried I'd have the same problem.
Nevertheless, the dress fit like a glove! The shoulders are especially perfect, and the neckline is the most flattering I've worn in this style.
Also pockets!? This dress has pockets! Like most women think, a dress that has pockets always seals the deal... 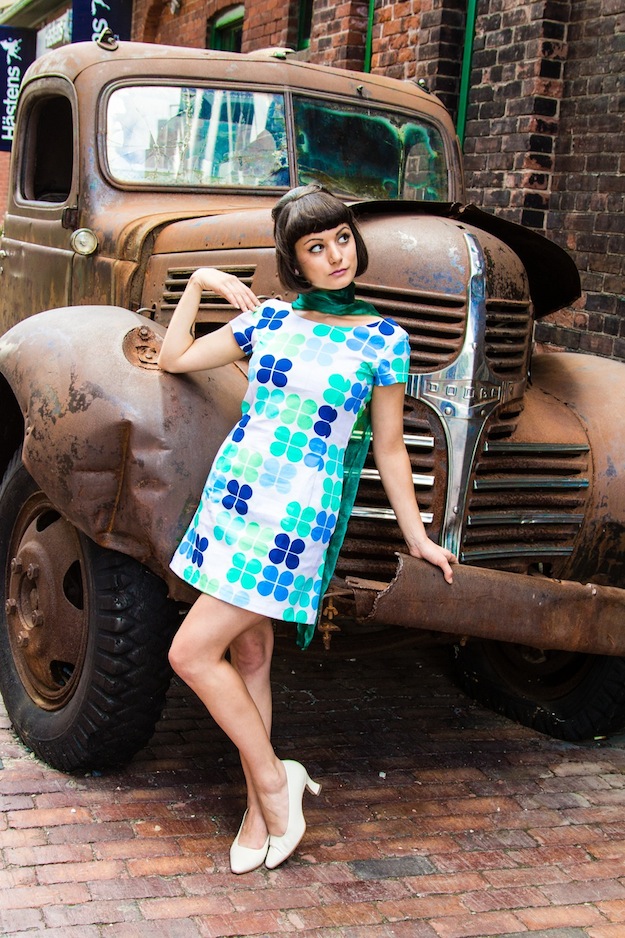 What I love about this dress is that it is made with 100% Cotton of a medium-heavier weight which gives it the perfect A-line structure and is still very breathable for the summer! 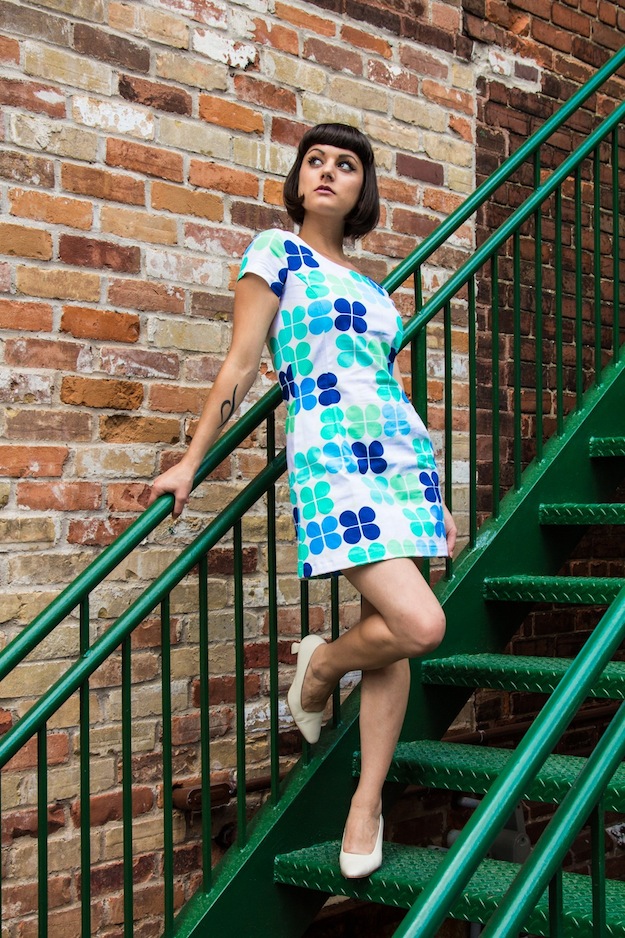 The Mod Bloom print on this dress is stunningly bold so I decided to pair it with
my vintage cream heels and a contrasting handmade green scarf. Also I couldn't resist adding a hair bump and white eyeliner with my cat-eye to really play out the 60s vibes!"
Want more Amanda?  Follow her on:
INSTAGRAM | FACEBOOK
August 03, 2015 — Alisa Martineau
Tags: caroline dress heart of haute review mod mod girl welcome to flipsville

Heart of Haute is the only vintage reproduction clothing company with a dedicated mod style collection. What is mod? In general, modern design values function, and is free of excess decoration or ornamentation. In fashion, Mod style has its origins with the beatniks in England in the 1950s. Their love of modernism in jazz music gave the style its name. The beats' black turtlenecks were combined with elements of slick, sophisticated Italian suits, and bold prints and symbols adapted from and influenced by pop art.

Mod fashion in the 1960s was at its peak, with everyone from Twiggy to the Beatles rocking mod looks. The mod aesthetics influenced more than just clothes; architecture, vehicles, and even household items were bright, bold and sleek. Mid-Century Modern is a term used to describe the innovations in modern design in the mid twentieth century; the 1950s and 1960s. Areas that had a lot of population growth during this time (like Florida and Southern California) have many great examples of Mid-Century Modern architecture.

Looking to experience some mid-century mod style on your vacation? There are numerous weekend events (or weekenders) that celebrate the design innovations in this subculture, from the 1960s to today.

Many of us today still enjoy the clean looks of mod style -  and a ride on a stylish scooter. No matter where you are headed, Heart of Haute can help you pack your bag with mod dresses and other great retro fashion! Save room in your suitcase next to your go go boots for our 1960s inspired dresses, skirts, tops, and more. Summertime is almost here.... that means days are getting longer, and skirts are getting shorter! Take a break from your everyday pinup or 50's inspired ensembles and test the groovy waters of 60's Mod Girl fashion! We've got three new groovalicious prints in a flattering cream background color available on our shift dresses and mini skirts!

Introducing the Carina Dress! Swing into sweet 60's style with this stunning shift dress. This fab frock features adjustable straps with buckles, and comes with a matching belt to tie it all together! Create a stand out in the crowd outfit with this Mod style dress crafted from the grooviest of prints. Looks like you have a reason to break out the go-go boots!  with our our 60's inspired Mod Girl Collection.

Another simple 60's staple piece is the mini skirt. A fabulous choice when paired with tops like the Trixie!  A flattering aline style skirt with a big matching belt. Go bare in the summer, or rock it with boots and tights in the winter.

Check out our Caroline Dress - cap sleeves, princess seams for a great fit, and side pockets for your scooter key. So honeys, what do you think? Check out our picks for the 5 Best Movies with Sharp Mod Style for even more inspiration. Will you give the 1960s a swing? Let us know!  And be sure to post your photos to Instagram and use hashtag #HauteHoney for a chance to win our $50 monthly gift card! Feeling groovy?  We sure are! Trending this season (and every season since the 60's in my personal opinion) are bold, bright prints! Back in the 60's women started wearing what's called a 'Shift Dress' as a sort of stick-it-to-the-man breakaway from the traditional cinched-waist styles that had been in vogue for women for so long.  Nowadays most of us do want at least a tad bit of waist definition, so our shift dress comes with a matching belt.

First off we have this sassy little number we like to call the 'Carina Dress'.  A shift dress crafted from 100% cotton fabrics that are so incredibly groovy!

Do you love it as much as I do? I know Megan Draper would love them. :P  These two new fabrics are pretty awesome too, we call them Cool and Groovy.

Another set of new items we have just added to our collection is the Coco Skirt.  This skirt is an a-line style with attached matching belt.

Remember, as always in the Mod style, these garments are shorter than our regular collection!

It's Raining Cats with A Fashion Nerd

We've teamed up with popular fashion blogger & model Amy Roiland to shoot our long awaited 'It's Raining Cats' line by Mandie Bee. We just thought with her gorgeous look & adorable haircut that she'd be perfect for these vintage inspired pieces!

Ruby This is the Ella Top, Pinup Couture Bow Handbag in Red, and Sassy Skirt. Photographed by Mandie Bee / Makeup and Hair by Lara Kay at www.SimplyVanity.com Amy is a classic beauty who can pull off any style. She updates her blog A Fashion Nerd every single day, making her a fans very very happy!  Her style ranges from vintage, gypsy, grunge, mod, and some things in between - making her blog a first stop destination for fashion inspiration.  She mixes vintage pieces with new ones to create completely unique looks we envy!

The Matey Dress in It's Raining Cats // Hats by NastyGal Aside from blogging for a living, Amy spends her days acting, modeling, and designing.  She also designs her own jewelry line - A Tiny Touch where she re-purposes found objects into unique vintage styled pieces. I mean... is there anything she can't do?

Amy wearing the Ella Top in Black and the Moxie Skirt in It's Raining Cats - Available at Heart of Haute.

The Miu Miu Fall 2013 Ready to Wear collection managed to combine exaggerated retro elements with bold modern shapes. The pop art polka dots and stripes borrowed from both the 1950s housewife and the 1960s mod girl, perhaps on a jet set vacation to Paris together. Playful colors like bright yellow, orange and pink accented stark black silhouettes, with a peek of stripes underneath. If you loved these looks as much as I did, Heartbreaker Fashion has the pieces that can help you emulate them. Our black Super Spy Dress is the perfect base piece to accent with scarves or tights in bold spots and stripes. This mod dress is available with or without sleeves. The accent color in this Miu Miu collection that stood out the most to me was the orange - try our Ella top in black and orange Cosmic Dot and our dresses and skirts in the Bee Bop Sunshine print. The Turquoise Cosmic Dot print on our Flirt Skirt and Doreen Dress capture the elements that I like so much in this collection; confident shapes and patterns, with contrasting black trim -  right out of a pop art painting. Our gray, black and white On The Dot print is more complex than a typical polka dot pattern, and can be found on dresses, skirts, tops, and even the perfect headband to match. Don't be afraid to mix up a few patterns to create your most inspired outfits for this fall!   -Allison